Find the Best Apartments for you

Constructed in 1922 when Downtown Huntsville was the hub of commercial and government activity, the Belk Hudson Lofts building has its own unique history of occupants.

The building also tells a story that reflects the rise, fall and revitalization of downtown commercial districts across the country and in Huntsville specifically. The style of the Belk Hudson Lofts building is somewhat typical of commercial buildings constructed at this time, though its patterned brick and decorative cornice along the top of the building made it stand apart from its neighboring structures. The R.O. Mitchell Realty Company and the City Café were the first tenants of the building when it opened in 1922, and they were joined by the Cicero Grocery in 1924.

1929 brought a complete turnover of occupants to the building. The French Meat Market, F&F Café and City Shoe Shop, and the R. C. England Barber Shop all operated here until 1931 when Fowler Brothers Department Store and Beauty Shop opened and occupied the entire building.

Fowler Brothers provided one-stop dry goods shopping for Huntsville residents in this location until it relocated up the street in 1940. Burgess and Glover, Inc. took over the space from 1940 until the Belk Hudson Department Store moved into the building in 1943. Belk Hudson continued to operate in this location until 1959 when it moved into another nearby address. Belk Hudson occupied the building for the longest continuous timeframe of any tenant.

After Belk Hudson relocated in 1959, the building was once again divided into multiple spaces. Through the 1960s, 1970s, and 1980s, the building was home to many businesses and retailers including Busch Jewelry, Huguley’s Credit, Allen’s Dress Shop, Scottie’s Variety Store, Modern Wigs, Holmberg Hilding Men’s Wear and an American Army and Navy Surplus Store. 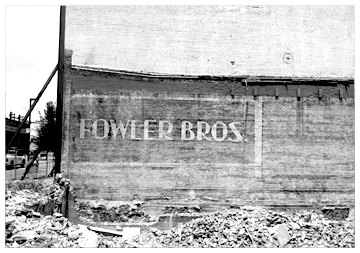 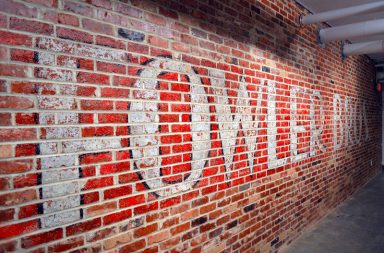 The changing uses and occupants of the building during those three decades stemmed from a social change that occurred throughout the 1960s. During that time, suburban developments sprang up across Huntsville and enclosed shopping malls became fashionable. The Heart of Huntsville Mall opened in 1961 with great success, followed by The Mall in 1966. Many businesses began the migration from the downtown commercial district to the malls, causing the commercial district to shrink. The economic tides started to significantly turn for downtown Huntsville.

1985 marked the highest vacancy rate for all of downtown Huntsville, and half of the Belk Hudson Lofts building was available for lease. The other half was occupied by the Surplus Store and Mary’s Shop for used clothing.

By 1988, Downtown Huntsville was showing signs of life again as newly opened restaurants and businesses began to thrive. Fuqua Hughes & Osborn P.C. opened on part of the property and operated there as Fuqua Osborn Architects until 2010. Also, Huntsville’s first microbrewery, Old Towne Brewery, opened on another part of the property in 2004 and added to the liveliness of downtown until it was destroyed by a fire in 2007.

The Belk Hudson Lofts building was purchased by Charlie and Sasha Sealy in 2011 and the development duo broke ground for Belk Hudson Lofts on July 11 of that same year. The preservation of the historic character of the building is very important to the Sealys, and they have gone to great lengths to keep the façade of the building intact and collect and identify several artifacts such as bottles and horseshoes that have been found on the site. Perhaps the most significant find during the site preparation process was a brick mural advertising the Fowler Brothers Department Store. The art deco-style advertisement from the 1920s had been hidden by an adjacent office building wall and was in incredible shape. The 30-foot-long ad was removed from the site brick by brick, and was reassembled in the lobby of Belk Hudson Lofts.

While this building has served many purposes over the years, the historic renovation and roomy living spaces will make its latest incarnation one of a kind with a unique lifestyle that cannot be found at any other apartment community in Huntsville.